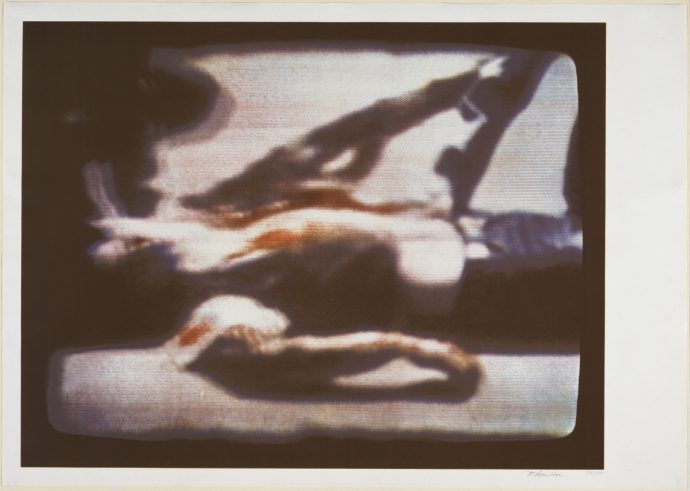 May 4, 2020 was the 50th anniversary of the Kent State University shooting of thirteen students by the U.S. National Guard. This is a good time to remember both the event and Richard Hamilton’s haunting Kent State print (1970).

On that bright May day in 1970 students and activists were protesting the expansion of the Vietnam War into Cambodia. The National Guard were on campus to keep the protestors in line. While some students and faculty were actually protesting, others were curiously looking on; others still were just cutting across the campus on their way to class. Shots ring out. Nearly 70 shots in 13 seconds. The soldiers shot into the crowd and thirteen people were hit. In the aftermath, four students lie dead and nine wounded. Twenty-year-old Dean Kahler, was shot in the back and his paralysis from the waist down would be a constant reminder of that day. (1)

This was not the era of cell phones but there are cameras. Photos were snapped and even some video was captured by journalism students. News of the event spreads like wildfire. Within hours images of the event find their way to Richard Hamilton’s living room in London, England, showing up on his new colour TV in the form of a BBC news broadcast. Hamilton just happened to have a camera set up in front of the television hoping for some interesting images to use in an upcoming printmaking project. As a picture of the wounded Dean Kahler appeared on screen, Hamilton captured the image on his camera.

When asked how he came to make his print series, Hamilton responded, “I felt that maybe it was necessary to look at the issues of our time and use the images that aroused questions. The things I began to do were usually the result of experiencing some image with a very strong impact. (2) He contemplated not using it because “It was too terrible an incident in American history to submit to arty treatment. Yet there it was in my hand, by chance!! It seemed right, too, that art could help to keep the shame in our minds.” (3)

He decided to use this image in a collaborative project with publisher Dorothea Leonhart of Munich and printer Dietz Offizin, Lengmoos, Bavaria, which would result in a series of 5000 silkscreen prints. This was a very big undertaking in those days. The complex printing process involved making thirteen screens, two of which were used twice, for the application of a total of fifteen layers of transparent inks in various shades and combinations of blue, red, yellow, violet and black. (4) Hamilton visited the print shop many times and verified and signed each work. Later he indicated that this work of art was the most difficult he ever undertook.

His idea was to make a large series so the image would remain in public view and would remain accessible to the average person – in fact, today you can buy one of these prints for between $1000-$2000. Kent State is in the collections of many prestigious art institutions across the world, including the National Gallery of Canada—which by the way, was the first place the image, most probably an artist proof, was shown in 1971. (5) The actual edition of 5000 premiered in Milan later that same year.

This print shares a blend of the indexicality of a photography (i.e., the sense of representing something real), mediated by many aesthetic decisions made in the printmaking process—the layers, the offsets, the colours, etc. The image is of Dean Kahler lying on the ground, legs truncated. He is tended by one person with another near by. We see the sun on his skin, the blue of his jeans… and the red blood. The black boarder – rectangular on its outer edge and rounded on the inner, we know is an old television screen. If we look closely we can see the pixilation and the horizontal scan lines typical of cathode ray technology of the time.

It is strange that the image is not centred on the paper. Hamilton wrote that it is printed off-centre to the sheet to express that “this was not just an image captured on TV, but a work about the mediation of this image by television.” In highlighting the televisual nature, the image embodies his concern that media transmits information indifferent to its content or meaning into the living rooms of the world, and the constant display of violence is desensitizing viewers. (6)

In the 1950s Hamilton was a founding member of the Independent Group. Their exhibition, This is tomorrow (1956), for which Hamilton made the now iconic, Just what is it that makes today’s homes so different, so appealing? signalled the beginning of British Pop Art.

I always thought of Richard Hamilton as a British Bad Boy artist of the pop art era. He was very much part of the swinging London scene, associating with the Stones, Beatles and other celebrities. But he was so much more — an artist, designer, multi-media experimenter, teacher, writer, exhibition organizer and political activist. In his practice he drew upon and critiqued a wide range of popular culture media and current events, including imagery found in newspapers, magazines, television, film and advertising. He used collage, painting, sculpture, graphic design, photography and printmaking to create a vast array of work. In the mid-sixties Hamilton began working with Marcel Duchamp on a number of projects. Collaborations with Duchamp seemed to free him from the trends and constraints of the art world, facilitating him to take his own path. (7)

Always a technology buff, Hamilton’s innovations included the use of the computer in art. Even though a fan of technology, he raised importance questions about the authenticity of the image in society and especially how technology leaves us suspended between illusion and the real. (8)

In 1992 the Tate put on a major retrospective and Hamilton was Britain’s selection for the Venice Biennale in 1993. Still working right up to the end, Hamilton helped design a major retrospective at the Museo Nacional Reina Sofia in 2011, which was subsequently presented at the Tate Modern in 2014. The exhibition included over 200 pieces spanning the 1950s to work he completed in 2011 in a wide range of mediums and genres including paintings, prints, sculpture, photographs, designs, and Duchampian reconstructions. (9)