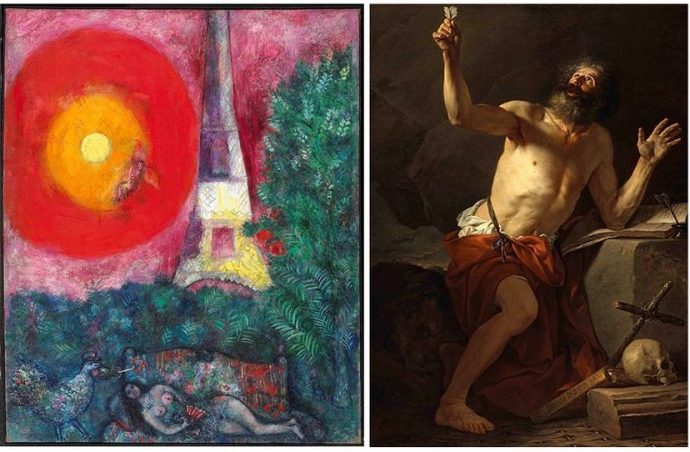 Chagall: Colour and Music, an exhibition presented at Montreal’s Musée des Beaux Arts last spring (28 Jan — 21 Jun 2017), was absolutely amazing and raised the profile of Marc Chagall (1887-1985) in the hearts and minds of many Canadian art lovers. The biggest Canadian exhibition ever devoted to the artist, it featured 340 works of art, including paintings, works on paper, costumes, sculptures, ceramics, stained glass and tapestries. Brought to life though music, photographs and film, the show provided a multi-media look at the artist’s long and productive career.

Just a year after this wonderful show in Montreal, I was surprised and disappointed to learn that the National Gallery of Canada was about to dispose of one of its two Chagall paintings in order to raise money for the purchase an undisclosed “cultural treasure.” The piece being sold was La Tour Eiffel, painted in 1929 and acquired by the NGC in 1956. It had been displayed a number of years ago but currently only Chagall’s Memories of Childhood (1927) is on display in the European Gallery.

It turned out the cultural treasure to be saved was Saint Jerome Hears the Trumpet of the Last Judgment, painted in 1779 by Jacques-Louis David. In my mind, yet another dreary religious picture was hardly a cultural treasure of national significance. Although acquisition of works by David would be beneficial for the national collection, I do not feel that the St Jerome would be a good representation of the French artist’s Neo-Classical style. Some of David’s well-know works include: The Oath of Horatio (1784), The Death of Marat (1793), and The Sabine Women (1796-99).

Many patrons of the National Gallery of Canada felt that Marc Chagall’s La Tour Eiffel, was in fact, a cultural treasure worth fighting for. My friend and fellow artist Bryna Cohen was particularly moved by the potential loss of the Chagall. A former docent at the gallery, she felt that de-accessing such a culturally valuable artwork would be in violation of the spirit, if not the actual letter of, the National Gallery’s mandate. She started an online petition. Fortunately there were many people who agreed with her and the sale was called off. Hopefully the National Gallery will have the two Chagall paintings on display in the European Gallery in the shortest possible time – we will see!

Last year following the Montreal exhibition, I was inspired to use Chagall’s style and motifs in creating a painting I call Horse and Pony Show (2017) with the intent of reflecting on the use of pregnant horse urine in producing hormone therapies for menopause. In making this work, I combined elements of Chagall’s I and my Village (1911) and his Circus and Paradise poster series.